With internet access becoming part of every family today, the last thing you want to lose sleep over is the security of your devices online. Netgear Nighthawk AC2300 router builds a security wall around every device accessing the internet in your home so that you can stream, surf and game with divine peace of mind.

Leading the pack is the 802.11ac Wi-Fi router’s outstanding ability to protect all devices in its network from cyberattacks. This is done through Bitdefender-backed Netgear Armor, a system used to provide multilayered cybersecurity.

Devices in the network are secured from hacker attacks, viruses, Trojans, spyware, ransomware, identity theft, and stolen passwords. On identifying and nullifying a threat, Nighthawk App sends instant notifications to the targeted device to alert the user.

While the whole exercise seems fruitful, engaging two separate systems feels burdensome. We wish Netgear would come up with one concrete app to solve multiple problems.

A good reason why such attacks are worrisome, Netgear Nighthawk AC2300 router adopts MU-MIMO technology to enable streaming to various devices at the same time.

The former technology, SU-MIMO streams to one device at a time making all devices in the network wait for their turn to receive or send data. While the deployment of MU-MIMO translates to extreme speeds, less lag and reduced buffering, should the network face an attack, detecting may prove difficult and the loss titanic?

Besides security, Netgear Nighthawk AC2300 router uses Smart Connect to make the best use of its high wireless speeds by placing slower devices in a separate Wi-Fi band from the fast. This reduces wastage of resources in the network.

The router also deploys Dynamic Quality of Service to prevent internet traffic congestion when the demand is high. Devices streaming movies from YouTube, Netflix, and related sites are allocated higher bandwidth than those surfing or chatting because they don’t use much data. Think of it as a proper managing of vital resources.

Equipped with 1 GHz dual-core processor, 128 MB Flash, and 256 MB RAM, the dual-band router enhances the performance of its wired, wireless and LAN-to-WAN connections.

That enables Netgear Nighthawk AC2300 to ace speeds up to 2.3Gbps; 600Mbps on 2.4GHz band and 1625Mbps on 5GHz band. Note, this is more theoretical than it’s practical. Real throughput is much less.

While MU-MIMO technology allows simultaneous transmission of data to various devices, Netgear Nighthawk AC2300 also integrates Beamforming+ to ensure that data goes to a particular client, not a team of similar devices using a particular band.

For the wireless network, this router comes with three detachable high-performance antennae to ensure wider Wi-Fi coverage and fast speeds. From tests conducted, however, the router gives excellent performance for close-range transmissions but downplays the long-range.

That beats the thought of its ability to serve large houses well. The stability of the signal remains strong though, leading to zero incidences of signal dropping.

In addition to security, the router uses Circle with Disney to provide smart parental controls to devices in the home network. With the app installed on a smartphone or tablet, the de facto network administrator can manage the kind of content accessed by the devices.

They can also view the history of websites visited by each device and pause the internet in the free bundle of the app. For more controls, the premium bundle of the app must be purchased; something many users find as a vice. 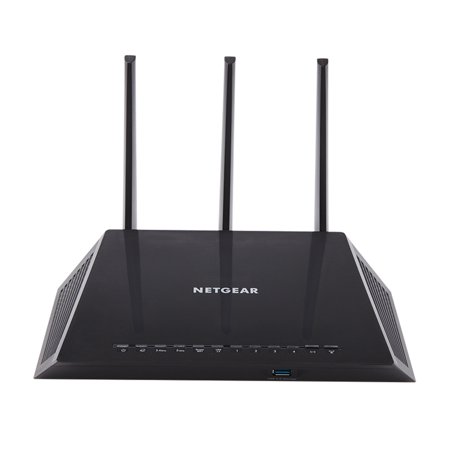 Though Netgear Nighthawk AC2300 doesn’t have an inbuilt modem, it has a huge body; 11.2 x 7.2 x 1.9 inches in size and 750 grams in weight. With that, purchasing it means the need for ample space if you don’t have a suitable spot on the wall to mount it. You also need to buy or rent a modem to bring in the internet signal home.

A slight difference between this router and others in the family, Netgear Nighthawk AC2300’s reset button is a small hole located at the far end of the back panel away from the power button. Other ports remain in familiar spots; three detachable-antennae ports, five gigabit Ethernet ports, USB 2.0 port, Power On/Off switch and power input.

AC2300 comes with one-year hardware warranty and 90 days 24/7 basic technical support from the day of purchase as long as the device is bought from an authorized reseller.

Setting up the router is made easier and faster by the Nighthawk App after the short initialization process. It also allows for further exploiting of the device such as testing internet speed. You can control your network through voice commands aided by Google Assistant or Amazon’s Alexa.

Netgear Nighthawk AC2300’s calling is to deliver state-of-the-art security to your home network.

Besides the double-wall firewall protection, DoS attack prevention, Wi-Fi protected access and separate guest network access, Netgear Armor steps in to build a hedge of fire around your network. With an increase in cybercrimes, you can’t afford to leave your home exposed to hackers and their evil plans.

While its speed beats others in the market, don’t let the long-range shortcoming or misplaced reset button lead you away from AC2300. HD gaming, extreme speed, and consistent signal strength are nothing if your devices lay naked and exposed to cyber threats.