One of the biggest challenges that most home and business owners face after installing WiFi is getting the wireless network to reach every single spot as intended.

If you’re having trouble getting your wifi to reach certain rooms in the house or offices, you should definitely consider using a Wifi Booster or Wifi Range Extender.

A Wifi Booster/Wifi Extender extends the wireless network signal to the dead zones in the house or office. This makes your connections faster and more reliable.

A Wifi Booster is particularly ideal for small to medium houses or offices. However, if you want to connect a bigger house or office with multiple rooms, then you might want to get yourself a Mesh Wifi System.

A Mesh Wifi System is a powerful system that includes a main router that connects directly to a modem and a series of satellite modules or nodes, allowing for a wide, full WiFi network coverage.

That said, this article defines what a Wifi Booster or Wifi Extender really is, how it works, and whether you should consider installing one.

What is a Wifi Booster or Wifi Range Extender and How Does it Work?

The term Wifi Booster is basically a catch-phrase for all devices that extend a wifi signal. It’s also commonly referred to as a Wifi Range Extender or Wifi Wireless Network Extender.

A wifi booster or extender is different from a wifi repeater (we will discuss this later in the article).

A wifi booster or wifi range extender or wifi network extender is a device that connects to your router either through a wired connection or wirelessly. This allows it to extend your wireless network coverage space by boosting or simply amplifying the existing internet signals.

By pulling existing weak wifi transmissions and amplifying them before broadcasting them to the required coverage space, a wifi extender helps extend your wifi network to unreachable spaces in the house or office.

Thanks to the stronger signals, your existing wifi network is able to reach multiple floors in an office building, multiple story houses, and even outside buildings or backyards at home.

Inside the house or office, the wifi booster extends the signal into spaces that were previously considered as dead zones due to walls or furniture obstructions.

To ensure maximum coverage, finding the perfect spot for your wifi extender is crucial. A general rule of thumb is to place the booster in close proximity with your router.

This way, the extender can grab a stronger signal and transmit it to your wireless devices located within the designated area.

But even so, the wifi extender should also be placed in a location that allows it to properly rebroadcast the wifi signal to parts of the house or office where you need a more powerful signal. 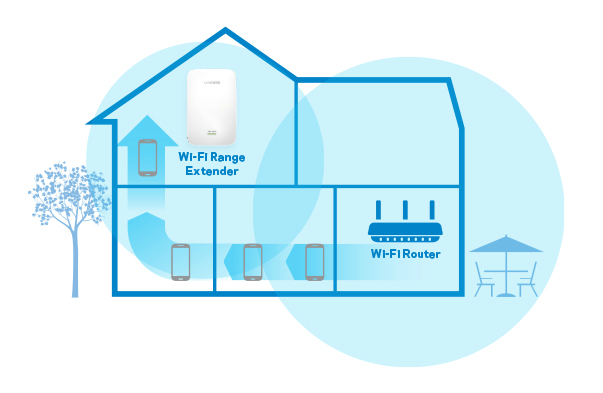 Nothing is more frustrating than installing a router and modem in your home hoping to achieve faster and reliable speeds, only to become frustrated by dead zones and poor connections in some rooms.

If you regularly watch movies online or stream video games, it can be a frustrating experience.

Here are some of the reasons why you probably need to boost your wifi network with a wifi range extender;

You must have noticed that some areas in your home or office have stronger and faster signals compared to some. Why is that?

Because the router will only transmit the strongest signals to devices that are close to it.

If you place the router in the living room, various parts of the house like upstairs, bedrooms, or basement may not have enough coverage.

This can be extremely frustrating especially if you’re a heavy internet user.

If yours is a small house or apartment, a wifi extender will come in very handy when it comes to improving your connection in areas with poor wifi signal coverage

Also, connecting multiple devices may overload your network, so using advanced wifi extenders like the dual-band models can significantly boost the speed and strength of your network.

These are usually referred to as dead zones or dead spots. These are basically spots where your wifi signal has never “step foot” in.

Usually, if your router encounters obstructions like walls or furniture, the signal may not be transmitted. Also, if you're trying to connect your device in rooms that are practically out of reach of the wifi router, you may not be able to achieve a connection at all.

If there are certain rooms or spots that don’t receive enough coverage, then you can easily eliminate these spots with a Wifi Booster.

It’s highly unlikely that a standard wifi router will be able to provide enough wifi coverage to a large house or office. With multiple rooms, you’re likely to experience slow wifi connections or worse, dead spots. This is due to the numerous walls and other obstructions that further weaken the signal.

If placing the router in the most central location of your home or office doesn’t provide enough coverage, then it would be a good idea to add a Wifi Range Extender to extend the signal to every single spot.

The whole point of using extenders is to boost the signals and of course, a stronger network signal means faster internet connection.

With a wifi extender, you can easily upgrade to the latest Wifi technology as well as the renowned 802.11ac speeds. And the good news is that you don’t even need to replace your old router to upgrade or obtain better speeds.

Even better, besides adding lighting fast speeds to your network, some modern wifi boosters make your network much more efficient and reliable, thus allowing it to handle countless devices as well as internet traffic.

When you don’t want to stay indoors all day long but still want to stay connected, adding a wifi booster is a good way to extend the signal outside. This means you get your devices connected to the internet in the backyard, front yard, patio as well as detached garage.

To ensure maximum coverage of your network outside the house, consider placing the wifi booster closer to the outdoor space you want maximum coverage. All you have to do is move the device from the central area of the room whenever you need a wifi signal outdoor.

However, if you want to avoid the hassle of moving the extender all the time, it would be a good idea to invest in a Wifi Mesh System. A wifi mesh system provides full wifi coverage to a big house with multiple rooms and a basement as well as the area surrounding the house.

Wifi boosters and wifi repeaters are devices that essentially offer the same functionality- that is, they help strengthen and increase the coverage of your wireless network signal.

However, they work in totally different ways.

A wifi repeater connects to your router and other wireless devices wirelessly on the same frequency. This simply means that your connected devices will only receive half the bandwidth, leading to slower connection speeds.

Since the repeater strictly connects wirelessly, it’s likely to cause poor signal strength due to walls, ceilings, furniture, and other obstructions. This is unlike wifi extenders that connect to your wifi network through a wired connection.

This means that it’s likely to provide a stronger, faster, reliable, and dedicated connection that is less susceptible to interference or obstructions.

So if you want to enjoy the faster and reliable speed with wide coverage, a wifi extender is much more suitable than a wifi repeater.

How to Set Up Your Wifi Range Extender

Installing a wifi extender is pretty fast, easy, and hassle-free. All you have to do is plug it in a power outlet location that receives the strongest wifi signal from your router.

Next, once plugged in, connect your device to the extender using your wifi or Ethernet connection.

Add the login details including a password. This will allow the booster to extend the network after connecting.

A wifi extender gives your home or office full wifi coverage for faster and reliable speeds all the time. It helps eliminate slow network connections as well as dead zones, especially in larger houses or offices.